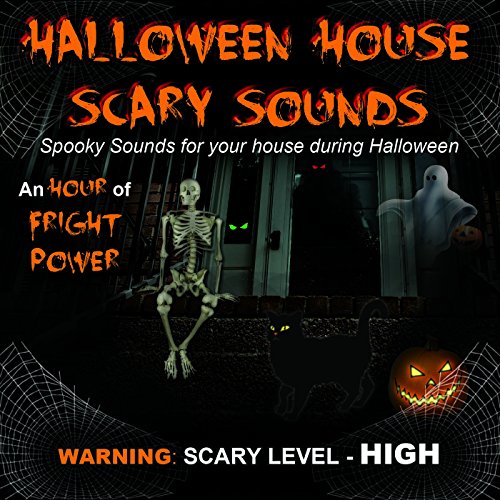 Halloween is the second highest grossing commercial holiday after Christmas partly due the fact that it doesn t cost as much and it s a lot of fun too. According to the National Retail Federation s Halloween Spending Survey, well over 50% of costumes purchased in 2013 were adult costumes indicating that Halloween is celebrated

Halloween is the second highest grossing commercial holiday after Christmas partly due the fact that it doesn t cost as much and it s a lot of fun too. According to the National Retail Federation s Halloween Spending Survey, well over 50% of costumes purchased in 2013 were adult costumes indicating that Halloween is celebrated by a wide range of ages.

HALLOWEEN SCARY SOUNDS is the perfect complement for any haunted house, Halloween party, and of course, Halloween night for those legions of trick-or-treaters. Priced to sell and with an HOUR of FRIGHT POWER, HALLOWEEN HOUSE SCARY SOUNDS will truly help create the atmosphere and feel of the HALLOWEEN spirit that will capture spooky sounds all night long for all occasions. WARNING: Scary Level HIGH.

HALLOWEEN FUN FACTS:
1.Because the movie Halloween (1978) was on such a tight budget, they had to use the cheapest mask they could find for the character Michael Meyers, which turned out to be a William Shatner Star Trek mask. Shatner initially didn t know the mask was in his likeness, but when he found out years later, he said he was honored.h

2.The first Jack O Lanterns were actually made from turnips.e

3.The word witch comes from the Old English wicce, meaning wise woman. In fact,wiccan were highly respected people at one time. According to popular belief, witches held one of their two main meetings, or sabbats, on Halloween night.g

4.The owl is a popular Halloween image. In Medieval Europe, owls were thought to be witches, and to hear an owl’s call meant someone was about to die.g

5.Trick-or-treating evolved from the ancient Celtic tradition of putting out treats and food to placate spirits who roamed the streets at Samhain, a sacred festival that marked the end of the Celtic calendar year.d

6. Souling is a medieval Christian precursor to modern-day trick-or-treating. On Hallowmas (November 1), the poor would go door-to-door offering prayers for the dead in exchange for soul cakes.e

7.Black and orange are typically associated with Halloween. Orange is a symbol of strength and endurance and, along with brown and gold, stands for the harvest and autumn. Black is typically a symbol of death and darkness and acts as a reminder that Halloween once was a festival that marked the boundaries between life and death.g

9.According to tradition, if a person wears his or her clothes inside out and then walks backwards on Halloween, he or she will see a witch at midnight.g

10.Mexico celebrates the Days of the Dead (Días de los Muertos) on the Christian holidays All Saints Day (November 1) and All Souls Day (November 2) instead of Halloween. The townspeople dress up like ghouls and parade down the street.d

11.During the pre-Halloween celebration of Samhain, bonfires were lit to ensure the sun would return after the long, hard winter. Often Druid priests would throw the bones of cattle into the flames and, hence, bone fire became bonfire. f

12.Dressing up as ghouls and other spooks originated from the ancient Celtic tradition of townspeople disguising themselves as demons and spirits. The Celts believed that disguising themselves this way would allow them to escape the notice of the real spirits wandering the streets during Samhain.f

13.Both Salem, Massachusetts, and Anoka, Minnesota, are the self-proclaimed Halloween capitals of the world.d